Fairfax, VA (April 22, 2010) – About 200 area community leaders and Imams responded to an invitation only dinner organized by the Islamic Circle of North America (ICNA) at the Islamic Center of Northern Virginia Trust in Fairfax, VA on Saturday April 10, 2010 to learn about ICNA’s efforts in outreach and service to humanity.

The program began with moderator Nehal Shah introducing Aamir Ansari for a recitation from the Holy Quran.  Imam Maulana Abdulwali Waleed welcomed the participants to the Islamic Center of Northern Virginia Trust  and briefly described the Center’s activities and fundraising efforts.

The ICNA advertising campaign entitled “Why Islam,” which promotes Islam by billboards and radio and print advertisements across America, was explained by power point presentation and mainstream media news clips by Sarfaraz Ameen.  The local activities of ICNA in the Greater DC area were presented by Esssam Tellwai, who presented power point pictures of the Virginia ICNA Center at 2913 Woodlawn Trail in Alexandria facility and their ongoing need. Regional activities of the Mid-Atlantic region and the overall organizational structure of ICNA was presented by regional director Iqbal Baqai, who outlined all the educational programs, social service and Da’wah programs.

The Vice President for Public Affairs, Naeem Baig, presented an impassioned speech about the need for Muslims to engage local social justice issues here in the USA without neglecting such issues in the Muslim countries. He noted that the DC area has more than 12,000 homeless persons, and that generally 1 out of 4 children growing up in the USA, such a wealthy country by world standards, are on food stamps, yet unfortunately out of the 600 social issues organizations in this DC area none are Muslim.  He exhorted the Muslims to be more engaged in the many local and national issues.

Iqbal Malik, ICNA’s Secretary of the Maryland Chapter, presented the diverse relief efforts of ICNA’s International Projects under the auspices of Helping Hand, like their medical camp and relief efforts in the aftermath of the Haiti earthquake, and the very popular “Sponsor an Orphan for $1 a Day” sponsorship program. He also told the audience Helping Hand was the first Muslim Organization to reach Haiti after the earthquake. 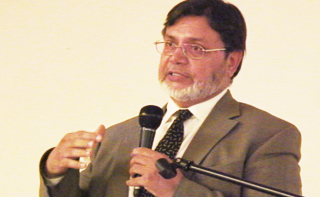 The keynote speech by the President of ICNA, Dr Zahid Bukhari, who is also the Director of American Muslim Studies Program at the Department Center for Muslim Christian Understanding at Georgetown University, and the Project Director of Muslims in American Public Square (MAPS), answered questions about ICNA workings from the participants, and emphasized that ICNA has strong partnerships with the other major Muslim organizations working for Muslim causes in the USA. He explained the fact that the events of September 11 and its aftermath have forced Muslim communities to gather their resources and speed up community development efforts and interactions with the larger American society. He stated that essentially Muslims have to do in 50 years what other communities took 200 years to do: namely, to firmly establish themselves and then reach out to other members of the society on issues of local and national discourse.   to build a viable vibrant new cultural zone of Islam here in the USA to add to the six other cultural zone of Islam: Arab; African; Turkish; Persian; South Asian; South East Asian.

The banquet closed with delicious dinner and sweets but with an understanding of urgency in coming together and working hand in hand for a greater cause – service to humanity.

An Era of Knowledge and Struggle Concludes